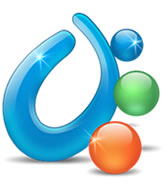 In case you didn't know: Windows 7 has really shitty shortcut management. Gone is the ability to create custom shortcut menus like in the classic Start Bar. Don't get me wrong: it's great to be able to find programs using the built-in search feature in the new Start Bar. But for some of us hardcore nerds - we like to see our own customized summary of icons.

And no, the convoluted mess of the "All Programs" list doesn't cut it. We want something more relevant, more specific, and more efficient.

After trying every utility out there, from start bar replacements to circle docks, I discovered a real winner.

I present to you ObjectDock v2.0: a really cool shortcut dock program for Windows. Frankly, it's the best. I couldn't have designed it better myself. And certainly Microsoft couldn't have: because if they did - it would be included with Windows.

Here's how it works

You start by creating a single dock which will reside in a permanent spot on your desktop. Your dock will be the central source of your most commonly used programs; making it an effective alternative to the Windows 7 Start Bar menu.

There are two different types of docks you can create. A "Zoomer Dock" or a "Tabbed Dock". Personally, I use both. A Zoomer for my most frequently used apps and a Tabbed dock for my completely organized collection of apps. 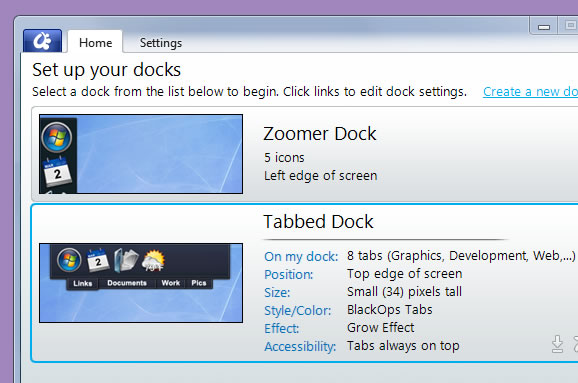 I wanted my docks setup in such a way that their existence is subtle, yet easy to access. Similar to the Start menu itself - but better. So, I found the best way to position the docks was like this (see my desktop below). My 'fast access' dock on the left hand side and the complete set of shortcuts in a Tabbed dock in the top center. 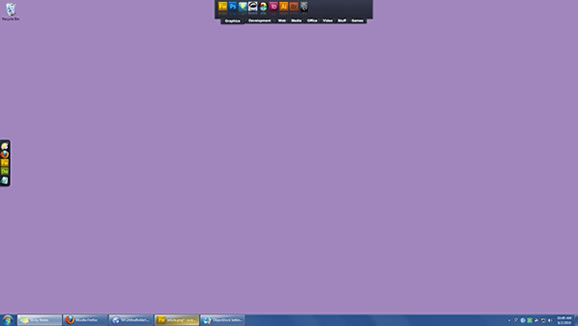 The process of adding/removing shortcuts makes it incredibly easy to build and customize the docks. Just drop & drag - no messing around with file paths or icons.

After using this setup for a while - I can attest it is a really intuitive way to launch programs. The dock on the left is small enough that it doesn't interfere with daily computer use - and the top dock is set to "tray mode" so that it only opens up when the mouse rolls over it.

Above: ObjectDock in tray mode (minimized)

What makes ObjectDock better than all of the other docks and shortcut utilities out there is these three factors: speed, visual appeal, and efficiency.

Starting with the most important factor, speed, the performance of ObjectDock is rock solid. Although earlier versions were a tad on the bloated side - the new 2.0 version is faster and more lightweight than ever. The menus are responsive and animations are quick.

In regards to visual appeal, ObjectDock is slick. In addition to being able to control things like color and transparency; there a number of different themes to choose from. My favorite is definitely 'BlackOps Tabs'. 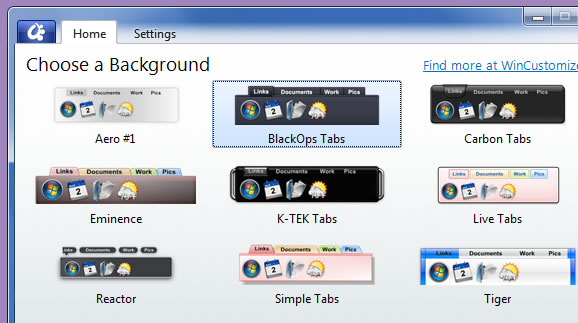 The new 2.0 version delivers new effects and animations brings. The new 'reflection' effect on a Tabbed dock is cool. And for the Zoomer dock, you get a couple of interesting animation variations to choose from. As with positioning, each animation can be precisely customized along with different options and quality settings.

Finally - ObjectDock is more efficient than any other dock out there. The general positioning features makes for a real smooth integration with a Windows desktop environment. And the Tabbed Dock is a great way to organize your complete "nerd toolbox" of apps & programs. Way better than simply using the Windows 7 Start menu.

My PC is used for business (and a little StarCraft). And I'm not the "gimmicky" type. So rest assured - ObjectDock isn't just a flashy app you install when your bored. For nerds like me, it is a necessity.

How to get it

You can get the free version of ObjectDock v1.9 here. However, the new v2.0 beta featured in this review is currently only available to those who buy v1.9. For just $19.95 I think it's a good value.

Since the version 2.0 beta is now included with any purchase of v1.9 the best way to get it is by purchasing directly from ObjectDock by clicking here and then the "Buy Now" icon.