This link essentially becomes a black budget the two entities can leverage for exploitation of the free market. No longer is the corporation supported by its' own revenues or investors - no, they have a new investor. And this investor - backed by a government that prints money out of thin air - has essentially a limitless pocket to fund all sorts of clandestine operations.

What makes this so detrimental to the economy: is the operations carried out are not necessarily for the sake of intelligence or military - they are for business advantage. To compete against you and me. 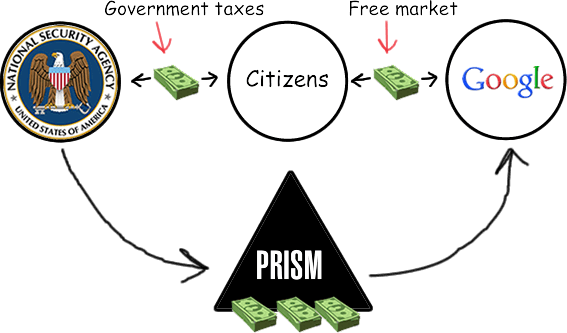 The company becomes a supernatural monstrosity in the marketplace - seemingly unstoppable. Immune from the natural corrections of the free market; the company can do nothing right and still make a profit. The company is now a 'vital asset 'to the NSA - and any potential loss of market-share is a threat to that asset.

So not only is the money being used to install the technology infrastructure for programs like PRISM but it may also be used for any number of other operations engaged directly in the market; to squeeze out the small guys; to help the company gain market-share and competitive operations so the asset itself can perpetuate it's usefulness.

And remember: it's not just 1 company being used as a puppet to carry out tactics & strategies on behalf of the NSA - there's a whole network of them. Even if one of the companies fail, you still have other players who can step up to bat.

This, I argue, is perhaps the biggest flaw in modern day economics. We have these monstrosity mega entities who can spawn & masquerade as public corporations; wreaking havoc on the economy for their own self-serving objectives and carrying out god knows what operations on behalf of big brother.

The free market is compromised, privacy is gone, the money is gone - when do we admit this system has failed?

It has to stop. At the very least - let us distance ourselves from supporting companies involved in subverting the free market.

P.S - if you think these kind of secretive, clandestine relationships between tech companies and the NSA are bad for our market, you might also want to take a look at the trillions of dollars the Federal Reserve has been funneling to its' cohorts worldwide.

Whether a bank, a search engine company, or a car manufacturer - it doesn't matter. Any secret deal happening between a corporation in the marketplace and a government entity; a direct beneficiary of tax dollars - is a blatant exploit in our economic system.