Does Google's relationship with the NSA nullify its privacy policies?

Google has a secret relationship with the NSA. That much is fact.

But what we don’t know is how this relationship may affect you and me: Google users. Because, well - its’ a secret.

This in and of itself is concerning. But specifically, regarding privacy policies... I got thinking... as a corporation - wouldn’t a secret relationship with a military intelligence agency make ALL your privacy policies null & void? 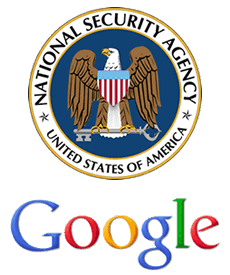 Sure, the Gmail privacy policy may very well be a valid corporate document that is adhered to by Google staff. However, as far as users are concerned - it’s toilet paper because even if Google adheres to this policy - the NSA probably doesn’t have too. These guys may literally be roaming the offices at Google for all we know.

So I assume, but can only speculate since the Google NSA deal is secret, that the NSA can violate Google’s privacy policies anytime, get access to whatever they want, and use that data however they want.

Of course, perhaps the same could be said about Microsoft. Or Apple. Or Amazon. Or any US based company in post Patriot Act America.

But since Google and NSA have this ‘special bond’ its easier to pick on them. Not to mention they have the biggest mountain of data. And a history of harvesting it.

And so, it seems reasonable to assume that the privacy policies you agreed to them will be more likely ‘indirectly violated’ than with any other company. Heck, it might be happening in real-time.

I’m no law expert - and frankly, privacy policies are boring - like most I rarely read them. But I think they’re generally good to have in place. The goal is to define exactly how our information is being used and who exactly will be viewing it. Whether its our home address, our shopping habits, or the contents of our email. So I’m just a tad concerned that privacy polices today, especially those by Google, may be totally irrelevant in achieving that goal.