Nerds with the business edge need a laptop with the ultimate combination of price, performance, features, and mobility.

In this article, I will outline 10 badass laptops that fit the nerd standard of qualification.

The 1400x900 resolution brings you to the HD realm of 720p. On a 15" that's going to be okay. However, if you NEED maximum HD video quality, something that will truly take advantage of BluRay movies then you can make a $150 upgrade to get 1920x1200 resolution. And speaking of upgrades, Alienware allows you to make an insane amount of customizations as you order from Alienware.com

The m15x has a smart bay which allows you to swap out the optical drive with an extra hard drive. Which means, this sucker has the potential for a whopping Terabyte of storage.

The audio quality is great and it features the option of having Creative X-Fi enabled.

With it's Intel Core 2 Duo processor up to 2.8 GHz, 512MB NVidia GeForce 8800M GTX and upto 4GB of DDR2 this notebook is a serious consideration for Nerds serious about gaming.

Yet there are some significant disadvantages to consider when considering the Alienware m15x. First is the obvious: you're buying the Nike of laptops. There is a premium to pay just to have the Alienware brand. So the bloated price is a big factor. Secondly, and this is really the only aspect you can knock, is the mediocre build quality. So while it may be uber expensive, it feels cheap. Also to remember is that the extreme performance comes at the cost of battery life. Making this 7 pound laptop a less than ideal for the traveling business nerd.

Some extra features on the m15x laptop is an HDMI port which enables you to output onto your home entertainment HDTV. And you can get this sucker with a TV tuner which means you can plug in your satellite TV or use it as a monitor for a Nintendo Wii. Lack of an eSATA port is a sign that certainly the m15x is getting a tad outdated.

Summary:
Extreme performance jam packed into a 7 pound, 15" model (mediocre build quality) and customizable with even more performance if you're willing to pay for it. A good choice for the business Nerd who doesn't mind traveling with a bulky laptop. Now, on with the smaller laptops. 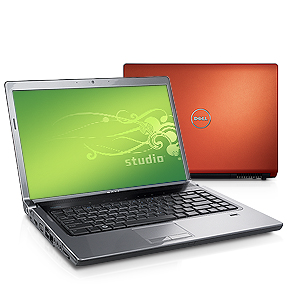 This is a budget notebook with "not so budget" specs and great color options.

This 15" notebook is rather bulky. It's a bit heavy for what you get so it's probably not something you'll want to pull out in Coach airline seating.

Speakers are really quite bad, but this isn't an issue if you're hooked up to a home entertainment system - particularly if you're using the included HDMI port.

Summary:
A budget notebook with "not so budget" specs and great color options. 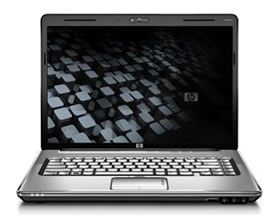 The HP DV5T is a high performance 15" notebook with upto 2.8 GHz of processing speed and NVIDIA's new 512MB 9600 M GT. The laptop has with tons of bang for your buck with it's array of features including eSATA and HDMI output.

The notebook has strong build quality, weighing in at a reasonable 6.4 pounds, with a fresh looking chrome design.

The screen is excellent and the sound is quite powerful for 15" laptop speakers. 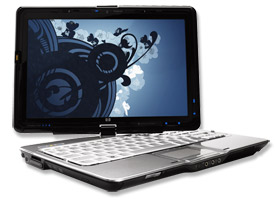 For those less game orientated and more artistic, the HP Pavilion is for you.

Popular among graphic artists who want a laptop that can be used for art, the Wacom pen and pressure sensitive screen allows you to draw in Photoshop or 3D apps like ZBrush. Although with the relatively small resolution and it's slightly less then optimal pressure sensitivity it doesn't exactly serve as a replacement for a high end Wacom Cintiq 22UX (which is a 22" pressure sensitive LCD monitor).

It's lightweight size and rotatable LCD screen means you can take this to a business meeting with the utmost of confidence. With it's 12" screen this is a smaller unit meaning that carrying it around is a breeze. And from SFBags you can get a tight "sleeve" for taking it to a meeting which means you don't even need a bag.

Being able to rotate the screen for people sitting next to you is a huge feature for any business nerd. Another reason why rotatable screens are so cool, is the ability to save desk space in a multi-computer setup. For example, you may have at your office a desktop machine alongside your laptop. If you use a program like Synergy you can use your desktop's mouse & keyboard to control your laptop as well. Then, with the rotatable screen you can simply twist it around so the keyboard is facing away from you. Effectively freeing up precious desk space.

The performance is cost effective. The previous model, the tx2000 was also popular but it's speed was considered it's biggest drawback. Now with a new processor and improved ATI graphics chip the performance is not an issue. The ATI graphics card blows away any other GPU in competitive tablets, with performance comparable to a low end dedicated card in a desktop scenario. means you'll be able to play some games.

The unit comes with 2GB of RAM, however if you are determined to get maximum performance you could buy two of your own 2GB sticks of RAM for 4GB total.

With it's mobility advantages and Tablet features, the tx2500 does indeed have a few drawbacks. The display is not as bright as one would hope, making it especially noticeable with direct sunlight and well lit areas. And the viewing angle can also be hit or miss (which kind of contradicts my point about being able to rotate and show people your screen during meetings). It's a little loud and it runs hot during intensive use, which is okay during a Canadian winter, but for most of us the excessive heat from the underside is annoying. Speakers volume is also quite low.

Summary:
Tablet PC functionality in a lightweight mobile unit (less than desirable build quality and dull screen), with the best graphics performance you can get in a Tablet and low price. 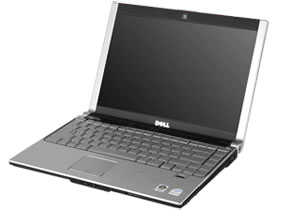 This was released in late 2007 with a beefy price tag, but now a year later, the XPS M1330 is in a good price range and still remains as a top of the line 13" notebook. Good specs all round including the GeForce 8400M GS which will be capable of playing new games. However, more demanding games like Call of Duty 4 or Crysis have to be played at minimum settings.

The M1330 is available in Black, Blue, White or Pink. It's quite thin and has a reasonably weight of 4 pounds. The screen is LED backlit making it nice and bright.

For watching movies off this laptop on your HDTV screen with the built in HDMI output you'll be to use the included remote control, which pops out of a handy little slot on the side.

Summary:
Good performance and great looks in this offering from Dell which includes includes a decent Nvidia card and entertainment features. 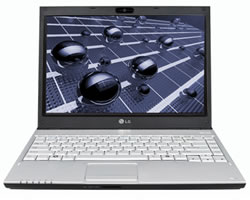 For the best gaming performance you can get in a 13" notebook - the LG P300 is it. Basically this is a high end multimedia machine in an ultra portable case. The catch? Not available in the USA.

At 3.53 pounds and under an inch tall the LG P300 packs an impressive 4 GB or RAM, 320 GB hard drive storage, and a respectable gaming card in the 256MB GeForce 8600M GS. Comparing it to the Macbook Air the P300 is about the same size, about $1000 less, has double the performance and gaming power.

The P300 has impressive build quality with a really strong lid that opens like you just sprayed it with WD40.

Speakers have good volume, although they lack bass which can certainly be expected in an ultra mobile. Although when hooked up to an external speakers system the sound was powerful and crystal clear.

HDMI out is a really kickass feature on any laptop for a nerd. Having the ability to plugin to HDTVs in your living room or at a friends house is an awesome capability.

For those nerds craving the most powerful lightweight mobile solution then the choice is between the LG P300, the Lenovo X300 and the Macbook Air. Given the price point, features, and impressive performance of the LG P300 it is the obvious recommendation.

Summary:
The most gaming performance you can get in an ultra mobile laptop. It is the Macbook Air for gamers (and anyone looking for the most bang for your buck).

The Vostro is designed to work with 32 Bit versions of Vista or Windows XP Pro so that might attract the many nerds who still refuse to install bloated Microsoft Windows Vista.

And even though it is marketed as a business notebook it does come with a respectable Nvidia 8400M, the latest Intel Core 2 Duo processors, up to 4GB RAM and 250 GB of storage.

It's a good budget laptop but certainly show's it's "budget" build with relatively cheap build quality. The Vostro thin plastics and somewhat unfinished feeling to the build and material. Not much else for features either - the mono speaker is absolutely brutal and there is no S-video or HDMI port.

Summary:
Good specs and a decent notebook for nerds who need a portable solution on a small budget. 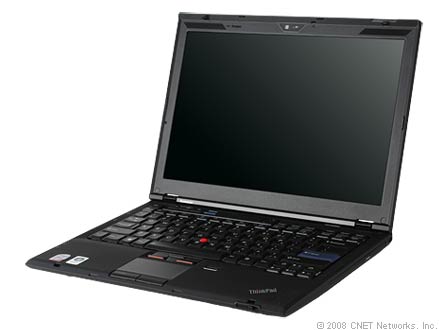 This slim 13.3" notebook was designed to compete directly with the Macbook Air. At it's lightest, with a 3 cell battery and no optical drive, it weights under 3 pounds and stands 0.73'' tall.

Not much options for storage - you're pretty much forced to use a SSD. The performance is great but certainly it would have been nice if Lenovo included the option for larger SATA drives.

Summary:
The most slimmest lightweight black laptop you'll find, albeit with a big price tag. 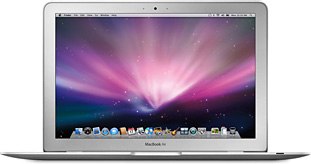 The amazingly thin design of the Macbook Air easily makes it the most impressive looking notebook you can buy.

Super strong and durable feeling. Which is good because this sucker costs a lot.

Features a vibrant LCD screen. Relatively comfortable keyboard layout. It's large touch pad is designed to allow you to zoom in and drag objects on the screen.

For most nerds, all of the Macbook Air's sexiness cannot make up for it's lack of performance. The painfully slow 1.2 GHz processor will make this notebook an unrealistic solution given the high price tag.

If you're willing to pay a premium for the paper thin design and Mac brand image then this might be a good choice.

Summary:
If you're willing to pay a premium for the paper thin design, while sacrificing performance, then this might be a good choice. 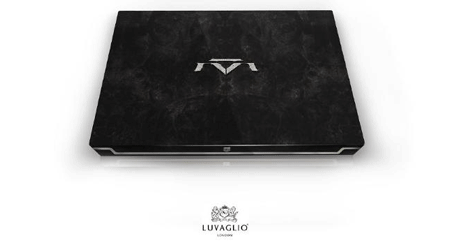 IF you thought the Macbook Air was expensive, then brace yourself for the price tag on Luvaglio's new laptop.

Probably powered by nanotechnology and a gold plated keyboard this mysterious million dollar laptop is the ultimate nerd business laptop. Because when you have one of these, you know you've made it big time.

Read an overview of each of the models discussed in this article below. And for further research, you'll find links to other reviews to help you make that final buying decision.

Included in the links below are reviews from Laptopical which is probably the best source of laptop reviews on the web. Laptopical is updated with at least one or two new reviews every week so be sure to check them out for the latest releases.