The Adobe Flashphone (what they should have done)

Hundreds of thousands of Flash developers out there - from animators to programmers - all very loyal to the Flash platform. All very keen to see their years of Flash development experience pay off. But now, their future is uncertain. Do they stick
with a platform that Steve Jobs just said has "had it's day" 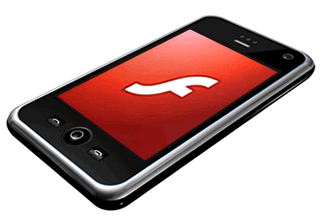 or do they move on to alternatives like jQuery and HTML5?

If there was a grand vision for the Flash platform - people wouldn't be mourning in mass right now about the impending death of flash. Sure, it's easy to sit on the sidelines and say what a company could have done. But that's exactly what I'm going to do.

Here is the strategy Adobe should have taken, but never did...

In spite of Apple's latest rejection - the hope of a 'grand Flash platform' would help outweigh disappointment in the lack of Flash on Iphones & Ipads. Because it would give people on the Flash side of the argument a way to say, "look, we don't care about Apple's devices - Adobe has something big on the way. "

The Flashphone, and of course the Flashpad, would be a tremendous apex of harmony for Adobe. The devices would serve as the grand stage for Flash developers to launch their latest projects. And a flexible platform for new developers to quickly pick up on and unleash new ideas.

Instead, Adobe has avoided a path to hardware and spent enormous efforts developing relationships with every existing handset maker. But they couldn't seal a deal with the top dog. And that hurts. In fact, lack of a future on the most popular mobile platforms - the Iphone and the Ipad - could indeed spell the death of Flash.

My argument however, is that the death of Flash was inevitable. These are just nails in the coffin - one that has been ready for Flash for some time. Case in point... Flash support in Windows Mobile 7. Of course Microsoft isn't going to support it. So why is everyone surprised Apple would take the same stance?

And especially for Adobe - what do they expect? That Apple, Microsoft, and Google will go out of their way to support them?

The reality is that Adobe needed to become an Apple. A Microsoft. A Google. They needed to leverage the Flash platform to save the Flash platform: by launching their own operating system. A hardware based Flash platform for mobile devices. But they never did. And unless 'the Flashphone' is already in development within a heavily compartmentalized secret project inside the dark labs beneath Adobe headquarters - it is to late to save Flash.

The real reason why Apple is not going to support Flash is because Adobe's Flash platform represents a parasitic threat to the Apple's developer base. To me this seems obvious, but perhaps I am erroneously mistaken. The premise is that Apple doesn't want Adobe developers. It wants Iphone and Ipad developers. And it wants the benefit of having a huge developer community just like Adobe.

And this is the source of contention. Because if Adobe developers can easily create Ipad apps using Adobe's tools, their loyalty is still very much with Adobe. And even though the Apps would run on the Apple platform, Adobe will have most of the leverage since the apps would be native to the flash platform. Making them easy to publish to other platforms - and thus killing the exclusivity factor that so many of the Iphone & Ipad apps inherently have. And of course - it's all about the apps.

Even without a 'grand hardware platform' for Flash there is still a bright future ahead. Adobe will continue to make great multimedia software creation tools - whether they control the platform or not.