An improved GTD strategy for freedom and focus

Recently I tweaked my personal getting-things-done strategy. And the results have been quite satisfying. So I wanted to share the technique for those of you determined to churn out maximum yield on daily productivity.

The main objective of course, of any GTD strategy, is to genuinely feel good at the end of the day. To feel good that you've made the most of your time. That you've made a contribution. And that you have made progress towards reaching your goals & dreams. 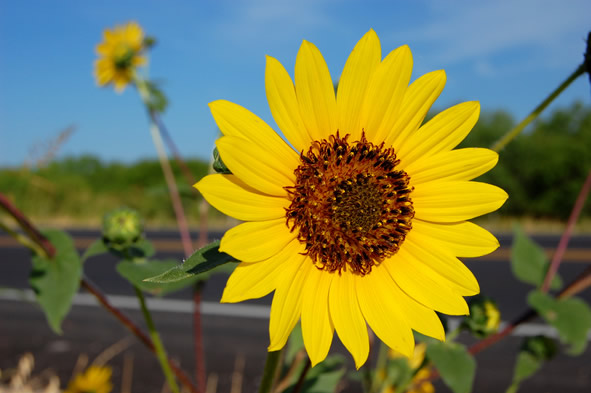 It soon became evident I was not hitting all the targets. Even though there were more of them to strike at. My ability to focus was hindered. I was struggling to find the time to squeeze in all of that pure, uninterrupted focus I have been so aggressively aspiring to achieve.

And indeed, the key to achieving the best possible, most creative, and highest quality results is through pure, uninterrupted focus on a specific area of your business or life.

Yet there's only so much time in a day.

So, striving for balance - I tweaked and iterated. This latest version, in a nutshell, revolves around just 6 things. Only one of which requires a significant amount of time commitment. It's the one task (objective; project; opportunity) you focus on when you first wake up. For a full period of 90 minutes. Before anything else (but don't skip breakfast). And without any interruption.

For the other 5 things, you get to them all throughout the remainder of the day. Maintaining momentum from the morning - you simply transition from one to the next. For 15 minutes each (again with exclusive focus with no interruption). With short breaks in between.

Less than 3 hours a day

The reason for the first 90 minute session is obvious. It's to make progress towards accomplishing the most important thing in your life, whatever that may be. Chances are you have something really important on your plate ... be it a huge obstacle or perhaps a great opportunity. Either way, I promise you this: if you you focus on it exclusively for 90 minutes a day, every day - it will eventually get done.

But 5 other things for just 15 minutes each? That's only another hour and 15 minutes total... are you saying your work day is just 2 hours and 45 minutes long?

No. Because something interesting happens when you sit down and mentally commit to '15 minutes' of focused attention on a single area. No matter how bad or intimidating it might seem - the very act of just committing 15 minutes will often & inevitably result in an even longer period of productive time. Sure, you might sit there for the first few minutes agonizing about the very thought of even thinking about this one thing... but then your brain will just sort of click-in - and before you know it you'll have accomplished a lot more than you ever expected. And you'll probably spend a good deal more than just 15 minutes, without even a second thought about the time passing. And that is the beauty! You didn't 'force yourself' to do it. You could have quit at the 15 minute mark. There was no obligation to go any longer, but you probably did anyway.

So I think that's what makes this updated GTD strategy so much more pleasing. It doesn't feel like much work at all. Nobody is going to wake up in the morning and be intimidated by a day that requires less than 3 hours of actual work (which is actually 'focus' in our context). Yet, in a way - this is just a mental trick. A hack that makes it easier for you to settle in, get focused, and start manifesting results. By the end of it, chances are your total day's amount of quality focus will be a lot more than just 3 hours. And heck, if you really did just burn through it all in under 3 hours, well now you have the entire remaining day to try something new and unexpected.

But perhaps what's most exciting is how much you can accomplish! If in the past if I tried to set blocks of time to make progress on six specific things - I would never get to them all. Because I had this idea that I had to specify the exact amount of duration for each thing - and was convinced there was no point in establishing any less than 60 minutes for each item. Now, my schedule isn't any lighter - but I've effectively lowered the level of commitment required. So the mind-set has changed. And now it's easier to shift focus and attack several different areas in a given day.

How to write the schedule

Of course, central to the GTD strategy is your daily schedule. You should have your day planned at least the night before. Here is an example of what tomorrow's list looks might look like, prepared in Tomboy Notes: 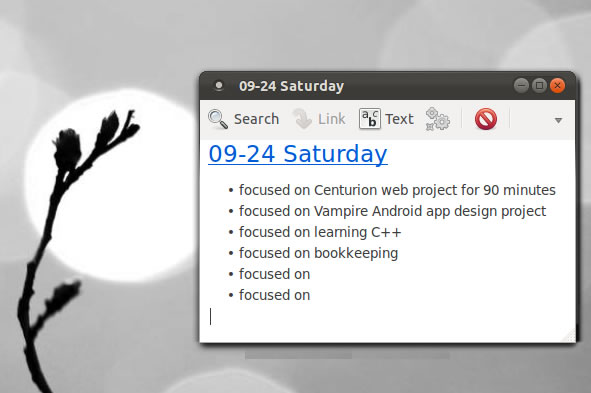 The first session I make special note of the 90 minute duration. And for the other items, it is implied that they will be at least 15 minutes. Later, if I was using a timer, I can make note of the actual amount of time each session turned out to be.

Finally, you'll notice I left two of the six spots open. If you're like me, you'll never find it hard to fill the slots with various things. But you might intentionally leave one or two spots open to grant even more flexibility. For example, because this is tomorrow's schedule - when I wake up to start this day - I can add something that occurred to me during the night. And when I finish all but the last item, I can simply choose something in that moment to focus on.

The key principles of the strategy

Self discipline, it seems, is a bit of an art as much as it is a science. As a full-time freelance entrepreneur going strong for over 5 years now, my biggest challenge (besides landing a million dollar project) has been managing time. In such a way that I can keep myself in check, measure progress, and genuinely feel good at the end of the day. So, over the years - I've discovered a technique, evolved the strategy, and established some core principles. They are as follows.

I've been embracing these principals every day. With the help of one of several iterations of the strategy I outlined above.

While it's not perfect, and I am by no means a shining example of golden riches, I have enjoyed a tremendous amount of flexibility and freedom in business and life - and it's allowed me to explore projects and opportunities I would have never pursued in a limited, linear task-oriented paradigm.

If you try it, maybe you'll unlock some new possibilities too.


Don't let the fear of the time it will take to accomplish something stand in the way of your doing it. The time will pass anyway; we might just as well put that passing time to the best possible use.