Today I discovered Helvetireader - a no frills web based RSS solution. It's actually a custom stylesheet that sits atop Google Reader to minimize the typical Google clutter. The result is a humble, clear and concise view of all your feeds.

Here's the before and after snapshots. 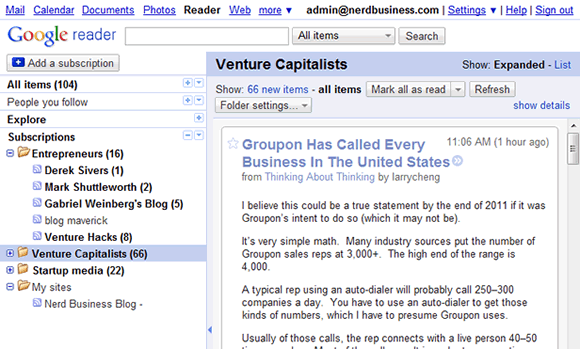 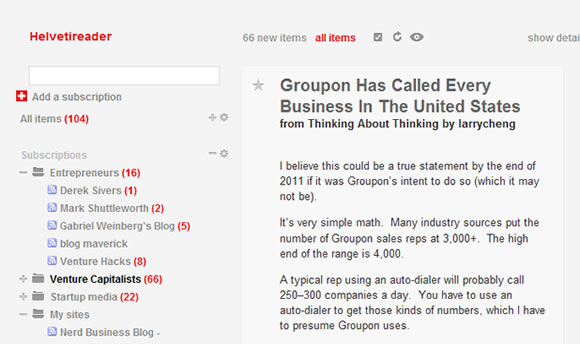 Since many of the options hidden away, you can use Google Reader shortcuts to do things like switching from Expanded to List view (numpad 1 and 2).

The easiest way to setup Helvetireader (in Firefox) is to first have the Greasemoneky extension installed. And then click the link to the user hosted stylesheet below.

For instructions on getting it to work for other browsers, check the official site.

How (and why) I found it

Unhappy with Google Reader, iGoogle, Netvibes and pretty much every desktop RSS reader - I made a point to dig deeper and identify an RSS reader that doesn't suck.

That's when this post on HN caught my attention. Buddy there was having a similar frustration; confirming again the lack of good RSS readers (other than the rich selection available on the App Store). So in his post he went ahead and created his own mockup for his vision of an RSS reader that doesn't suck. A good effort, but still pretty half ass - and a static concept was not exactly the solution I was looking for. Anyway, a commenter recommended Helvetireader (which was later edited into the original post).

I suppose a more elaborate, yet simple, RSS reader could incorporate bookmarks and other ideas Loren mentioned - but for now - the best web based RSS reader is Helvetireader.