Catch is a neat little app for Android (and iPhone, iPad) that I've been using lately to keep track of receipts that I can later write-off as business expenses. Because nothing annoys me more than having a stuffed pocket full of receipts that may-or-may-not ever make it to the 'shoebox' or wherever the hell you're supposed to keep these things.

The app itself is actually a feature-rich note taking solution - with a simple interface for writing text notes, saving audio recordings, and snapping photos. Plus, it's got the added benefit of 'tags' to help you organize it all.

The 'snapping photos' feature is the way I save these business related receipts. And to think of it - it could probably be done without Catch - but the nice thing is - with Catch everything is timestamped, I can tag it, and also enter a description at the time a particular photo was taken (cause the tax man likes details). 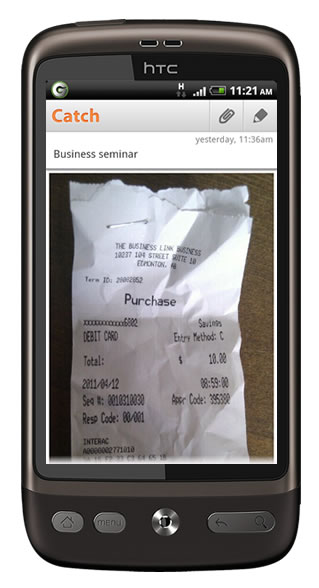 And of course, later on my desktop I can open up a spreadsheet (or accounting software), login to Catch.com and formally save and enter the details of the expense to the records. 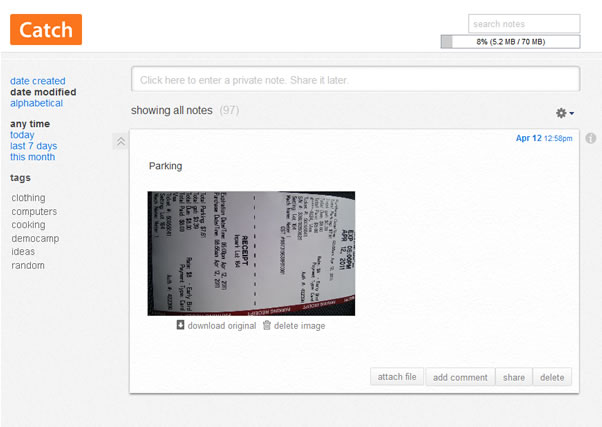 Not just for receipts. Business cards & audio too.

Last night I attended #democampyeg and met a ton of cool business nerds. After any of these kind of events, I return with a stack of new business cards - and being a 'hoarder' I find that unless I do something with them right away they're going to be sitting around my office forever.

So, obviously - I now use Catch to take a quick snapshot to save it to digital reality - and promptly dispose of the physical card.

It's a really quick way to do it - and of course, being able to access this information later - without having to manually store and look around for the image file - is a big advantage.

I'm also the kind of nerd who occasionally does a Star Trek style 'voice log' to make mental notes that can be later reviewed for tactical advantage. Catch makes this procedure easy and being able to tag voice notes is really useful.

All in all - great app. I always wanted an app like this. In fact, before Catch was around I had designed a UI concept for an app idea much like it. But as the saying goes, "for any good idea you have - someone else, somewhere else in the world has it too - and it's only a matter of time before the idea is manifested - whether you make it happen or not." Sure enough, it wasn't long before the Catch team created the solution I was looking for.

And I think they nailed it. Albeit, its lacking some 'power user' features at the moment, but the app is really promising - and I highly recommend it. Plus, their recent influx of $9.3 million in capital should guarantee they'll be improving their product for a long time to come.