I have a confession to make. After years of being an avid user and advocate of OneNote, Microsoft's note taking software, I have completely switched to an alternative. A superior alternative. And it's called myBase.

The search for a better note taking program began as a result of a desire for more power. It wasn't that OneNote didn't do its job. Far from. OneNote is designed to work like an everyday life notebook; and it does that exceptionally well. But I wanted something more.

Hell, something tells me there should be more to modern day note taking programs beyond the capability to search and paste images. I mean, I get that Microsoft is trying to emulate the concept of a notebook: but this is 2010. I want something dynamic!

And so, the search for a better note taking program led me to myBase. Here is an in depth review. Along with tips on how to effectively use it.

In a nutshell, myBase is a tree structured free form database. Much like a file browser, data is organized into folders that exist in a tree hierarchy.

Surprisingly, this simple tree structure layout is the biggest advantage of myBase. Because it allows for unlimited depth in the hierarchy. 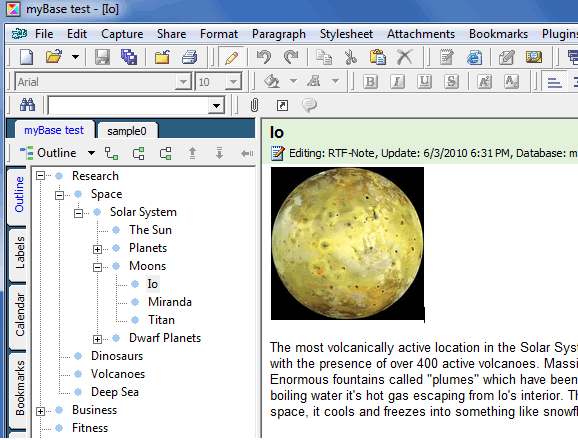 Of course, each directory contains a blank text area for typing out information or adding images, and even attachments. What I really like about myBase is the directory setup. In addition to having unlimited depth, each 'folder' in your tree is treated the same - regardless of whether or not there are child items.

So using the above screenshot as an example - you could have a paragraph introduction for each of your main categories (ex- Space, Dinosaurs, Volcanoes). And then the sub-categories can also have their own child items. And on and on. With no limit on how many child items you can create it becomes really powerful.

For this reason, of a simple yet powerful hierarchy tree, myBase is a far more superior alternative to OneNote for intensive information work.

Capture ideas and build on them

On any given day I have myBase open as much as the email and web browser combined. The great thing about a freestyle note taking program like this is that you can keep notes on just about anything. Day planning. Ideas (as you get them on the fly). Conversation notes. 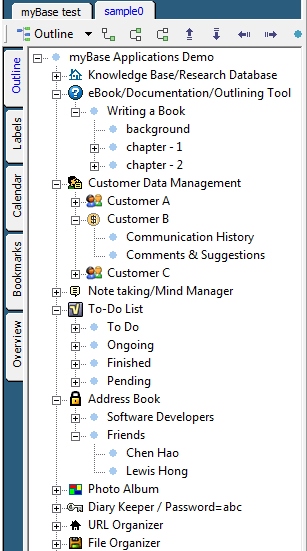 Writing a book? I wouldn't recommend any other tool.

But I find the most effective note taking strategy in myBase is for business projects. Any important business, strategy, or project can be micro managed in myBase. Allowing you to have an expansive information dumpsite for any and everything pertaining to your latest projects.

Of course, the program is not without it's faults. Particularly in handling images. If you paste an image into your notes - the navigation tends to get jumpy - and it increases the file size of your database significantly.

In that regard, lies another inherit disadvantage: the larger a myBase database gets the slower it takes to launch or save. These two quirks are non-factors in OneNote. But aside from save & the initial launch load times myBase is incredibly lightweight.

In addition to the navigation tree, myBase has some other tools to help you organize data.
It has a basic implementation of Bookmarks and Labels; but unfortunately it is just that: basic. There is not much of any really dynamic features to speak of. Which hopefully means they'll be coming soon (tags perhaps?).

myBase is currently in it's 5.xx version with a 6.0 on the way. I asked the WJJ team when the expected release date is and was assured it could be out in as little as a few weeks. For now, the WJJ team is currently offering a free test build of version 6.

You can try that out OR if you prefer a stable release - myBase Desktop 5 includes a 30 day free trial. To buy a license, it starts at $59 which actually includes up to 3 systems (so you can have one on the office, home, and laptop systems). And that's a great value.