Censorship is evidence of a dying system trying to protect itself - giving inspiration to those needed to deliver the final blow.

Yet there comes a point when a dying man can no longer fight - no matter how much wealth or power he had previously accumulated.

With every wasted breath, an acceleration to the ultimate fate.

So too then will Twitter (in partnership with big brother) accelerate self-demise as they increase efforts to clamp down on conservatives, libertarians & 'right wingers' like @LauraLoomer, @RogerStoneJr, and @mitchellvii. The increasing number of suspensions, censored tweets, manipulated numbers coming as no surprise in light of their newly announced 1984 policy to review users' behavior both online and offline.

Money & information in our new era 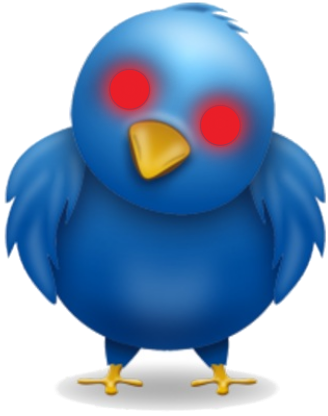 With the advent of the blockchain - money has become decentralized. Bound to no country - the 'power to print and control' effectively taken away from the state. The old fiat system of government issued currency now facing eventual death. The rapid pace of which is most clearly evidenced, in my view, by surging Bitcoin demand. Fueled by not only technology - but fundamentally human inspirational contentions: excessive manipulation, overreach and controls imposed on capital by said state and their corporate cohorts.

Just as with money: information and user generated content ie- Twitter, Wikipedia, YouTube, et all - will become backed by a (the) blockchain; transitioning the responsibility away from the clutches of centralized power and into this idea of an immutable ledger: an append-only, peer-to-peer, permanent, decentralized and censorship-proof log of transactions (or posts or Tweets or articles or encyclopedia entries and so forth).

Just as fiat money has no chance of competing with a technologically, morally and immutable integrity bearing superior so to then will 'social media sites' as we know them stand no chance of retaining respected users in the future as those smart enough to understand what is going on choose the superior alternatives: the blockchain based sites and platforms that do not and can not alter or block their users' feeds or timelines.


At $8000 USD per Bitcoin, we can already see the impact of the world's largest, distributed and irreversible accounting ledger on traditional banks and the like.

But it doesn't stop there...

because with a little more work, based on that same technology: we will see the rise of the world's largest, distributed, and irreversible 'Twitter feed'.

Nor would the execs at Twitter adopt this technology because they clearly do not have their customers best interest at heart.

Censorship is a losing strategy. Achieving temporary silence at the cost of inspiring those targeted to fight back harder; to build bigger and better megaphones.