The Main Reason Why Windows 8 Sucks

Disclaimer: I haven’t tried Windows 8 and have no intentions of doing so. 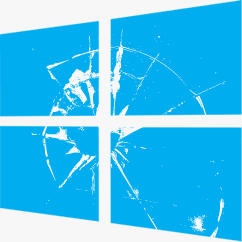 In fact, by not wasting time playing with the new Windows 8, I’m able to focus on the main reason why Windows 8 sucks. And besides, reviews are confirming what we already know: the new Metro UI, er tablet UI (lets just call it what it is: a tablet UI), is a total clusterfuck for desktop users.

The main reason why Windows 8 sucks is because of Microsoft’s blatantly obvious and monopolistic corporate agenda. And I’m not saying that as a paranoid tin-foil hat person, but as a long-time Windows user going all the way back to the days of 3.1; as a user who cares about what made Windows great to this day.

Windows 8 represents a dark new path for Microsoft. And that path is clearly to take-over the entire distribution of software and ‘apps’ for the Windows platform. Whether its a crappy mobile game or a high-end CAD product for desktop: they want to facilitate the transaction and they want their 30%.

And indeed, every app sold through the new tablet UI will earn Microsoft 30% of the total sale. A page from Apple’s book for certain.

Worse yet, Microsoft - like Apple - can choose to censor and deny software from being distributed on their new tablet UI. For example, if someone wanted to create an alternative store; perhaps some legitimate competing store that focuses exclusively on games. Microsoft can simply say no and that’s the end of the road for that developer.

Of course, you can just switch back to the traditional desktop - and you are still allowed to install programs like you would on any previous version of Windows - like purchasing & downloading them from a website or through a third-party app store like Steam. But that is today. What about Windows 9? Windows 10?

It’s only a matter of time. And the proof is in the pudding. Because if Microsoft is willing to break their own desktop product this much already - then it's not a stretch to assume they will continue to sacrifice user experience in favor of becoming supreme gatekeepers. You don’t have to be Bill Gates to figure this new tablet UI on a desktop debacle was a strategic business decision and not just some “design hunch” about combining the two paradigms.

Microsoft is playing this off as ‘being innovative’, as a grand “reimagining” of Windows.
Don’t be fooled.

If you are currently a Windows user - now has never been a better time to adopt Linux for your desktop PC. Or get a Mac. Microsoft is just following in Apple's footsteps anyway.