10 things the Motorola XOOM can do the iPad can't

Mozilla's latest Firefox 5 mobile web browser is the best tablet browser yet. The slick new mobile tabs implementation is a splendid UI innovation. And the bookmark syncing feature, that enables you to sync bookmarks with a desktop computer or any number of other computers and devices - is a must have.

On the XOOM, I can go to the Android Market and download any kind of wallpaper imaginable. Including Live Wallpapers, the kind that animate in the background. Or change depending on the time of day.

And even if you don't want a Live Wallpaper - the wallpaper functionality in Android is generally better all round. Find a cool looking wallpaper on the web? On the XOOM, simply tap and press “Set as wallpaper”. 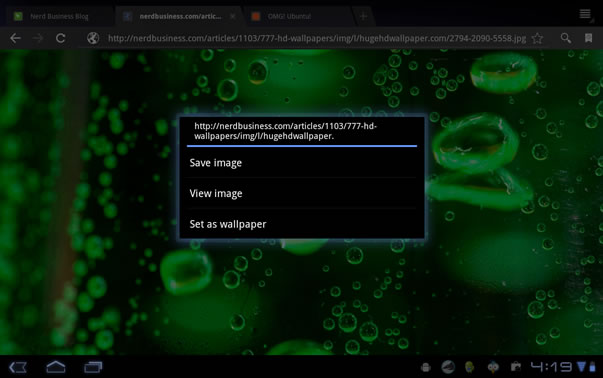 The iPad has no such “Set wallpaper” feature. And it definitely does not have Live Wallpapers.

With the iPad, there is no removable storage. No SD card you can swap in and out. Heck, it's a pain to even try accessing the storage without using iTunes - let alone getting new files on it. With the XOOM, it's easy. Plug it in - and it will show up just like an external hard drive - giving you full access to the built-in 32 GB of internal storage.

And now, as of the latest Honeycomb 3.2 update, SD card functionality is fully working. Which means it's even easier to transfer files to and from your XOOM. With up to 32 GB of external storage.

By the way, as of mid 2011, manufacturers are slowly rolling out 64 GB SD cards. While I can't confirm if it's possible yet, XOOM owners may in the near future have the potential to use these cards - for up to 96 GB of total space - a massive amount for a mobile device.

This one is closely related to my first point. Yet, although Firefox 5 has sweet new tabs, the default Honeycomb browser (which is basically Chrome mobile) has awesome browser tabs too. In fact, they work just like you would expect, like tabs on a desktop browser. In other words the XOOM has real browser tabs. 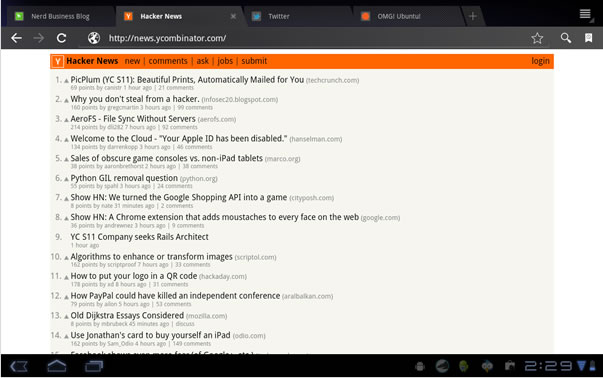 The iPad Safari browser has mediocre tabs. In fact, they're not really browser tabs at all. They can be more accurately described as 'browser thumbnails' that are no where near as convenient as real tabbed browsing.

Command it with your voice

Anywhere you can type text - you can speak into the XOOM. And Google's voice-to-text technology will take over.

In addition, you can use Google's Voice Actions app to perform basic commands. For example, say "map of Seattle" and it will automatically open a Google map of your desired city. Say "listen to Alice in Chains, Man in the Box" and it will start playing the music you want.

Watch HD movies in any number of formats

Goodluck playing HD movies on an iPad unless you're buying them from iTunes.
With the XOOM just copy any HD movie from your existing collection to the device over USB, get RockPlayer - an awesome media app - and play any number of file types, formats and codes including AVI, MKV, OGG, DivX, Xvid, or H.264 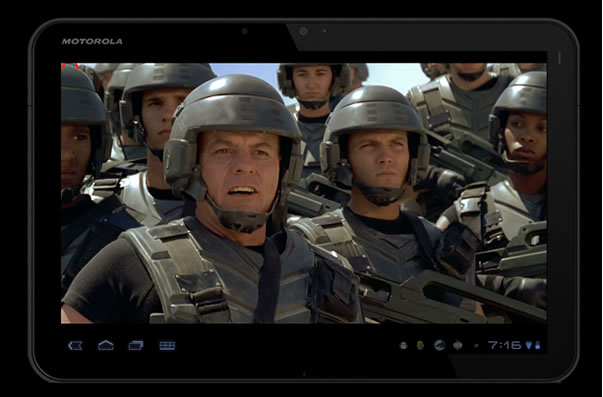 The XOOM is an HD movie machine in disguise - and performance tests have shown it capable of up to 1080p at 30 fps (with a reasonable bit rate at around 15 Mbps). Which leads me to my next point...

Watch native 720P HD video on the device, or the big screen

One of the coolest features on the XOOM is the inclusion of Micro-HDMI port - which you can use to connect to an HD TV and mirror what you see on the device as you use the tablet in real time.

Of course, you can do this on the iPad. With a catch. The iPad has a screen resolution of just 1024 x 768. Which is a 4:3 aspect ratio, unlike the XOOM's 16:10 widescreen ratio. So when you view the iPad on your big screen TV, there are going to be 2 big black bars on the side.

Now recently, Apple released a separate product called the Digital AV Adapter - which is a sort of a solution to prevent the black bars. I say 'sort of' cause it only will do this to certain content. For example, the Homescreen still does not fill up the entire width of your HD TV. Not to mention that you have to buy the adapter separately.

On the XOOM, the screen resolution is 1280 x 800 out of the box; higher than the iPad. So when you plug it in with HDMI, the 80 pixels tall Android taskbar disappears and you're left with a resolution of 1280 x 720; exactly the resolution of a true widescreen 720 HD TV. Genius!

On the XOOM, or any Android device, you can add a ton of things to your home screens: folders, widgets, shortcuts, apps, and even photos. On the iPad, your limited to just icons of apps. The only thing you can do with the extra sliding screens of an iPad is to show more icons of apps. Icons, icons, icons.

The highly customizable home screens of Android look amazing on the XOOM. What I like about it is that you can create screens that are 'themed' for specific purposes. For example, you could reserve one as a 'social media screen'. With widgets and icons from Twitter, Facebook, or any other of your favorite networks - all on one screen.

And as of the latest Honeycomb 3.1 update, widgets are now re-sizable - giving you an even greater level of customization for each of the home screens.

The Multi-tasking on iPad is a lot like their implementation of browser tabs... linear and mediocre.

On the XOOM however, multi-tasking is the real deal. Your most recently kept apps are available at the tap of your finger - allowing you to easily switch between apps on the fly. While it would be cool if Honeycomb supported an unlimited number of apps in this list - the system is definitely an order of magnitude better than using one app at a time like on the iPad.

The most heavily debated lacking feature of the iPad is definitely on the XOOM.

Enjoy smooth playback of Flash content on the web and on the countless blog posts and web pages that embed Flash powered YouTube videos. Rather than hoping they have HTML5 versions.

And no Steve Jobs, Flash is not 'buggy'. In fact, it works just fine on the XOOM. 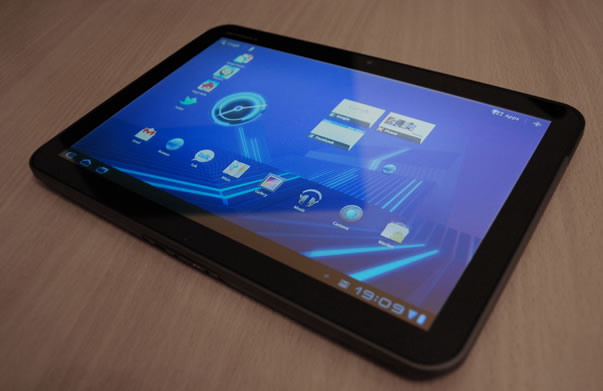 The XOOM is an expandable powerhouse with the freedom and control that nerds want and need. Not surprisingly, it is my tablet of choice.

Where to get the XOOM

For US customers, the XOOM is available directly from Motorola.com

For my Canadian buds, check for the XOOM at your local Best Buy, Staples, Future Shop, Sears, London Drugs or Telus Store.